How to Identify Flies – The 6 Most Common Flies

Trout usually receive little pressure when it comes to winter months, and are not picky in the selection of flies. If you are not catching any fish, it’s probably because you have not yet found good holding waters or, if nymphing, have not yet got down enough to the fish. It is necessary to ensure you have enough weight for placing the flies directly at the bottom or using an indicator like poly yarn for detecting a subtle take. The article will help you identify flies — which is all you need to boost your chances of catching fish in every stream and river in Montana.

You will find the flies below in an abundance of colors and sizes. In time, you will be able to differentiate between them easily. But everyone has to start somewhere, so let’s take a look at the most common flies and the purposes they serve best. That way, when it comes your time to identify flies, you’ll be prepared!

The dry fly is one that shouldn’t miss from the arsenal of any fly fisherman. Using them is also very exciting – the trout will come out to eat the fly as it settles on the surface.

Unlike summer fly fishing, dry fly fishing in the winter will usually involve patterns like midges and baetis in small sizes. 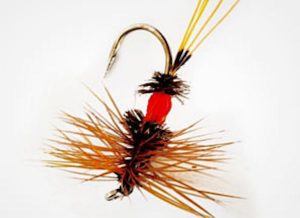 Stoneflies are important when fishing in just about any Montana river, particularly freestone rivers, as trout look for stonefly nymphs, even in the colder months. Even though there are a plethora of different stonefly patterns, it is not necessary to get more complicated than a girdle bug. A brown and black size 6 or stonefly nymph attached to something smaller is a good bet for anglers.

Most of our area freestone rivers also have a smaller size (#10-12) winter stonefly that’s black or dark brown in color. These can often be easily spotted against the white background of ice or snow. 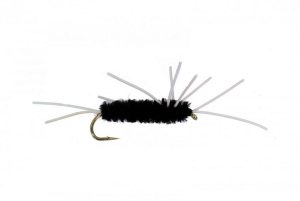 The nymph is one of the most productive flies in fly fishing. Fish, mainly trout, feed sub-surface most of the time. The nymph refers to a stage in the life cycle of insects like the caddis, mayfly or stonefly. Similar to most insects, nymphs transform through some stages until they arrive at the end of their life-cycle. It is the stage where the insects live under water, in the bed of the streams, at the bottom of lakes.

This is why nymphs are very popular fishing flies: trout can easily spot and recognize them. Learning how to identify flies like this one is important because you will probably use it often!

Smaller size midge and baetis nymphs should be an essential part of any winter fly box. 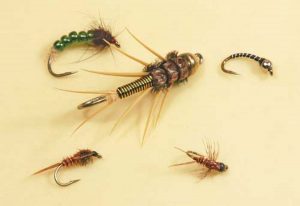 The pheasant tail is a nymph that due to its versatility, needs its own category. They can be with or without a beadhead or flashback and which style to use depends on the conditions. Pheasant tails are used all year round in nearly every river in the world. They generally mimic a mayfly, but can be used for caddis as well. We would advise you to first try the smaller size during the cold months (an 18 or a 20). Either way, any pheasant tail variation will work.

Even though it may not be as glamorous as summer fishing, sometimes you may find yourself on the river in the middle of February. During this time, the San Juan worm is often the magic ticket. Used in a variety of sizes from 6 to 12, in colors that include pink, red, wine and orange, they are nearly always productive during winter. They are tied with both chenille and wire bodies. Wire worms are a reasonable preference for the more profound runs where going to the bottom is not a challenging process.

The streamer is among the most exciting flies for trout, probably second only to the dry fly. It is also the second most productive, after the nymphs. However, this is what you should keep in mind when using it: most strikes that fish make on streams are entirely explosive and aggressive, as the trout attempts to consume the fly as quickly as possible, to prevent it from getting away. To increase hookups, It is essential to learn to use the strip set when setting the hook.

When it comes time to identify flies, we hope you’re feeling prepared and ready to take on the stream! How many of these flies have you used already? Do you have a favorite one? We’d love to read your tips and tricks for beginner and seasoned anglers alike, so feel free to use the comment section below!